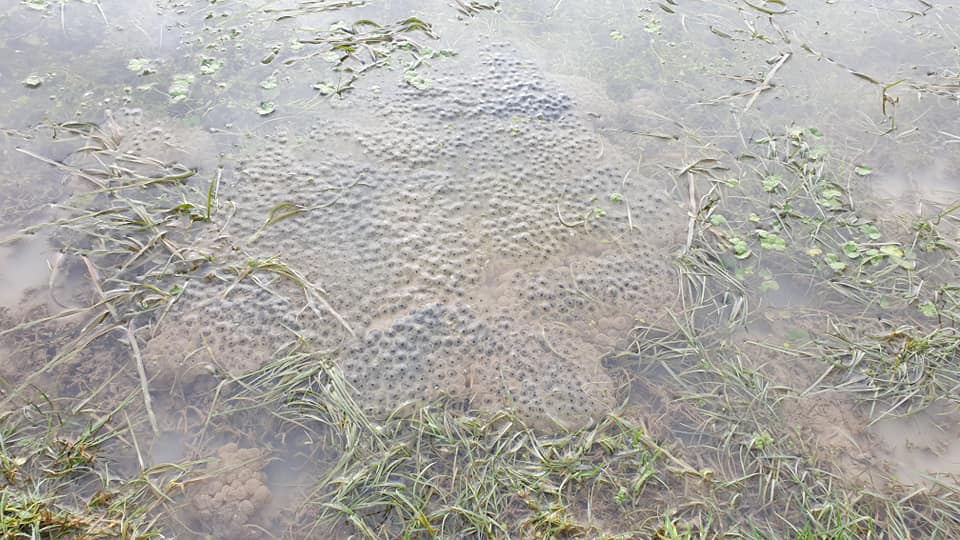 Frogspawn in our waterholes – first time ever!

My grandson walked up to the top waterhole (spring-fed) on Friday and found some frogspawn there, so yesterday we walked down to the bottom waterhole (fed from drainage from the fields) and found a lot more – in various stages of development, some obviously freshly laid and some where you could see the round eggs already changing shape & elongating to become tadpoles – WOW how really exciting💖

The start of the track system & waterholes at Bitless Equestrian

We moved here in November 2006, I had Jamie Jackson’s Paddock Paradise book for Christmas, read it and built the track in January 2007 😁.  The top waterhole was a pre-existing damp patch which the previous owners had ‘warned’ me about, they suspected it was a spring – so we dug it out and left it to fill up and naturalise with the help of some elodea (elodea canadensis), water hawthorn (aponogeton distachyos) which smells absolutely divine when flowering (seems to be most of the year), and a couple of water lilies kindly donated by one of our clients.  Along the way some Frogbit (hydrocharis morsus-ranae) appeared, also water plantain (alisma plantago-aquatica) – I can only assume brought by visiting wild birds 🤔 and I planted some watercress where the excess water runs off from the waterhole (horses love watercress I’ve discovered!)

The bottom (second) waterhole was also a damp spot we dug out in an area lovingly known as the well field (because there is a well in it 😂) and we added some of the water plants from the top waterhole – that area, being damp & boggy, is already home to water forget-me-not, (myosotis scorpioides) ragged robin (lychnis flos-cuculi) and angelica (angelica sylvestris).

So – why has frogspawn appeared now?

I suspect it’s probably a combination of all of the above, if you have any ideas, please comment below 😊

Tell us what you think... Cancel reply